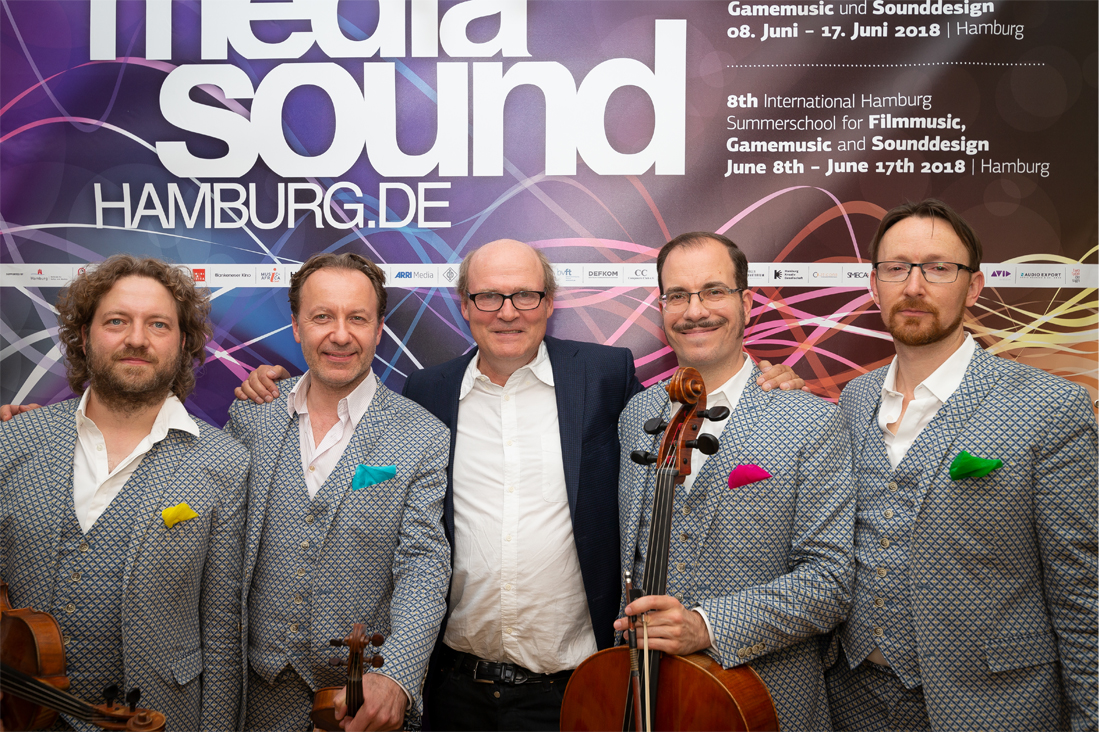 This years’s Media Sound Hamburg ended with the last workshop day of the MasterClass Sound Design under the direction of the Mexican sound designer Martin Hernández, who was twice nominated for the Academy Award.

For ten days, film composers*, game musicians* and sound designers* from all over the world worked on concrete projects in various workshops, master classes and forums. International industry professionals and renowned experts*from 14 countries gave participants*from 14 countries valuable tips for their further professional careers. From 8 to 17 June 2018, around 500 visitors*attended lectures, public forums, awards ceremonies, film talks and the Farewell Party at the Elsa-Brändström-Haus in Hamburg-Blankenese, including scholarship holders including Yohanan Bekele from Ethiopia, Louis Edlinger from Switzerland, Dora Filipovic from Serbia, Mert Gencer and Hans Nieuwenhuijsen from the Netherlands and Rethabile Nyamate from South Africa.

“We are very happy about the great cooperation and the support of the online portal Music in Africa. Thanks to a scholarship we were able to invite the very talented sound designer Rethabile Nyamate to Hamburg. In general, the support of young composers is very important to us,” says Achim Esser-Mamat, director of MediasSoundHamburg.

Highlights of this year’s MediaSoundHamburg for the professional audience included the Masterclass SoundDesign with the Mexican sound editor and sound designer Martin Hernández (Oscar nominations for Birdman or The unexpected power of ignorance and The Revenant), the MasterClass GameMusic with the Finnish composer Ari Pulkkinen, who composed the music for the video game Angry Birds, the MasterClass FilmMusic with the Danish composer Frans Bak (Doctor Foster, Lilyhammer, Thirteen Steps Down) and the MasterClass Orchestration with the jazz pianist, composer and arranger Kuno Schmid. The lectures on natural sounds, urban sound design, artificial intelligence and sound branding were very well attended.

For the fifth time, the Young Talent Award Media Music was presented as part of Media Sound Hamburg. This year, the expert jury awarded two first prizes to Lev Tyrnov from Ukraine and Rune Eskildsen from Denmark. Her submitted works for string quartet were premiered by the renowned Kaiser Quartet on the evening of the award ceremony.

This year saw the first Nordic Media Sound Day with films and workshops by film composers and sound designers from neighbouring Scandinavian countries. Among others, the Finnish sound artist Kirsi Ihalainen presented her new sound art and design product KELOSOUND, Thomas Lund from Genelec spoke about Loudness Wars & Tipping Point. At the end of the day, jazz pianist Martin Tingvall played some pieces from his programme. The Nordic Media Sound Day was supported by the Danish composer network BFM (Brancheklubben for Film- og Mediekomponister).

Parallel to MediaSoundHamburg, the augenmusik series of events for pupils*, trainees, students, teachers*, lecturers* and media educators* took place at the same time. In various workshops, lectures and cinema screenings, the function of sound, noise and music in connection with moving images was examined. Highlights of the programme were the fully booked workshops “Wie entstehen Geräusche im Film” for school classes from grade 6 and the film screening of the international cinema film Astrid by Pernille Fischer Christensen in the presence of Danish film composer Nicklas Schmidt.

The 9th International Summer Academy for Film Music, Gamemusic and Sounddesign will take place in Hamburg from August 9 to 18, 2019.

Of Vaders and Raiders

No Time for Despair
Scroll to top