How To Produce Film Music Under Palm Trees

Music in Africa Conference for Collaborations, Exchange and Showcases (ACCES) 2019 in Accra, Ghana

For its third edition, the Music in Africa Conference for Collaborations, Exchange and Showcases (ACCES) took place in Accra, Ghana from 28-30 November 2019. As a partner of the Music in Africa Foundation, Media Sound Hamburg was represented by Achim Esser-Mamat and I, who was fortunate enough to give a class on composing for film. While last year’s ACCES had been set up in Nairobi, Kenya, Accra proved a worthy choice and provided the experience of a lifetime.

In August last year Achim had hosted an African Night as part of Media Sound Hamburg (MSH), and with that brought a bit of African musical spirit to Hamburg. Part of the reason for setting up what would turn out to be the highlight of MSH 2019 was the fruitful partnership between MSH and Music in Africa, an organisation which, among other things, had set up ACCES, a yearly three day-event with the aim of supporting local musicians in various parts of Africa by inviting guest speakers to talk about music production, as well as by setting up networking events in which local musicians can meet powerful music publishers, managers, agents and such like, and by hosting concerts which let original voices in the African musical world shine. Furthermore, as part of their fresh collaboration, MSH and Music in Africa decided to grant scholarships to aspiring artists from Kenya and Ghana who wanted to partake in MSH and learn the skills taught there. While Alice Ragoi, the scholarship holder of 2019, was not able to attend this year’s event in Hamburg because she wasn’t granted a visa, composer, producer and guitar player Emmanuel Lamptey-Mills was pleased to be announced as the scholarship holder for MSH 2020. Needless to say, I didn’t hesitate for a second when I was asked to represent MSH in Accra by giving a class on composing for film. Who in his right mind would say no to the opportunity of a few days in Ghana, speaking with aspiring musicians before having lunch under palm trees and drinking fresh water from a coconut? Not me. 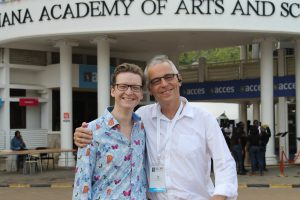 While my presentation differed only slightly from last year’s, the audience’s reaction was remarkably different – and this probably says more about the Ghanaian culture and spirit than about anything else. As opposed to last year’s more practical questions which plagued the partly aspiring, partly experienced musicians following my class, this year’s feedback focussed on the mental and emotional concerns of composing. I was delighted, of course. Delighted because I relish being in the position of a therapist – the wounded healer – who looks you in the eye and shares wisdom about how to cope with life and because I had never been asked questions like, ‘How can you compose happy music when you are sad?’ It is an essential, excellent question, though – as is ‘How do you gain confidence as a composer?’ 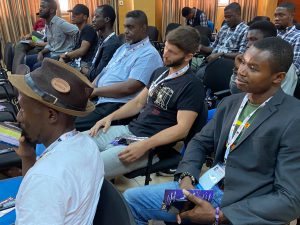 A beautiful facet of being a composer – especially for media – is that it requires the utmost concentration.

Concentration is essential in terms of mental well-being. Imagine a boxer, wrecked with fear and anguish about the prospect of taking on a heavyweight champion in the ring. He might be fearful and nervous on his way to the ring, but as soon as he steps into it and gets ready to land the first punch the anxiety ceases—because it has to. The mind has to concentrate on the task ahead of it. And so it does focus, blocking out any anxiety that had plagued you just seconds ago. The brain is amazing that way, and not a iota different from how it worked thousands of years ago when our predecessors encountered a wild bear in the woods. Just imagine running away from a bear. Believe me, in the act of saving your life, you certainly won’t notice how anxious and fearful you really are. The attention given to saving your life takes up all your concentration and energy. That’s why in various mental health clinics drawing mandalas is a favourite for healers and patients alike—it focusses the mind. I recommend seeing composing for film, television, commercials or games like that. You have to focus on the task in front of you. And how do you gain confidence in life? By going out there. If you are afraid of water, jump into the water. If you afraid of spiders, take a spider into your hand. And then do it again. Over and over again, until you lose your fear. It’s not so bad after all, is it? The same goes for composing. Put in your 10,000 hours, just plough on, learn and grow and you will gain the confidence you need.

Last year’s ACCES had been a success, both artistically in terms of the musical acts on stage during the showcases, as well with regard to the number of attendees. Naturally, this year there were parallels to the previous event. Streaming and royalties were a big topic, discussed in lively panels, often with heated exchanges between musicians and label bosses, with participants supported and challenged by members in the audience. In another panel, local musicians were advised how to navigate the recording and distribution industries ‘in a changing environment,’ while in yet another discussion alternate music platforms were explored.

But putting the varied, helpful and at times welcomingly combative panels and their success with the audience aside, ACCES 2019 was faced with a similar challenge like last year; one that needs to be addressed. Already in 2018, the Music in Africa Foundation had difficulties attracting local musicians to take part in their event – not for the lack of trying, since the marketing efforts were outstanding, and locals could register and attend for free. However, despite the fact that a large number of locals had registered for the event in Nairobi, only a small minority of them actually turned up. Sadly, ACCES in Ghana was no different. ACCES had the numbers (more than a thousand participants, more than 50 countries represented, more than 100 global industry players, more than 80 performers), but it leaves a sour taste that an event targeted at a specific group was hardly attended by that group. One Facebook user gave an indication as to why this might have been the case, making this rather bitter comment: ‘Ask yourself whether any of you invited any music manager. You people have turned the music business like occult society and keeps things to yourself then after you come out to say no music manager attended to suggest we are not serious people.’ And so on. Do local artists in Accra and surroundings find ACCES too elitist, ‘like an occult society’? Or were they waiting for a personal, more targeted invitation, as the comment implies: ‘If we are of importance and interest am sure they will have look for us and give us invitation….when those same people come and looking for our content to use on their platforms to be rich and pay us chicken change they know where to find us yet when its comes to conference they claim they dont know our offices.’

As mentioned before, ACCES is not a Ghanaian event—every year it takes place in a different African country. There might be the problem. It is outside the bubble, not something that can establish itself in the regio n over a period of time and win the trust of locals. Or I might be entirely mistaken. I can’t claim to know the answer. But it is intriguing to speculate, especially considering how closely knit the musical community in Ghana is, which is certainly how I have experienced it outside ACCES, with strongly connected musicians who support each other as brothers. ACCES, in comparison, feels like an intruding foreign body. I don’t know how to overcome this challenge. There is no doubt that locals would benefit immensely from attending this rich and diverse event series, which shines a spotlight on important issues facing African musicians especially and aims to bring more awareness and publicity to their arts and crafts. There are many reasons to love ACCES and everything it stands for.

The highlights of last year’s event were the showcases each night, and this year was no different. Several popular and talented Ghanaian musicians were, after all, persuaded to attend the event and give concerts.

Among these musicians was, much to our delight, Emmanuel, the young gentleman who had been awarded a scholarship to attend Media Sound Hamburg free of charge. Emmanuel turned out to be so prolific and versatile that we spotted and heard him play guitar in no less than three different bands. What we heard on these three nights was astounding.

African pop music with Western influences made the audience jump up and dance as if there was no tomorrow. Then two musicians with guitars sang us into a trance with their onomatopoeia, before funk and metal made the stage shake and a group, aptly titled FOKN Bois, made strong statements against the government’s law to punish homosexuality and therefore love between two – or more – people. It was an ecstatic program over these three days and nights, and by the end we were left exhausted but content.

A big round of applause should go to the organisers of ACCES, especially Eddie Hatitye and Claire Metais, who made sure that the whole organisation was running as smoothly as possible. Indeed, it ran more smoothly than last year—making sure everything works out as envisioned and without much delay always takes experience. Certainly a lot of experience was gained by everybody involved, and Achim and I are certainly not the only people looking forward to next year’s edition.