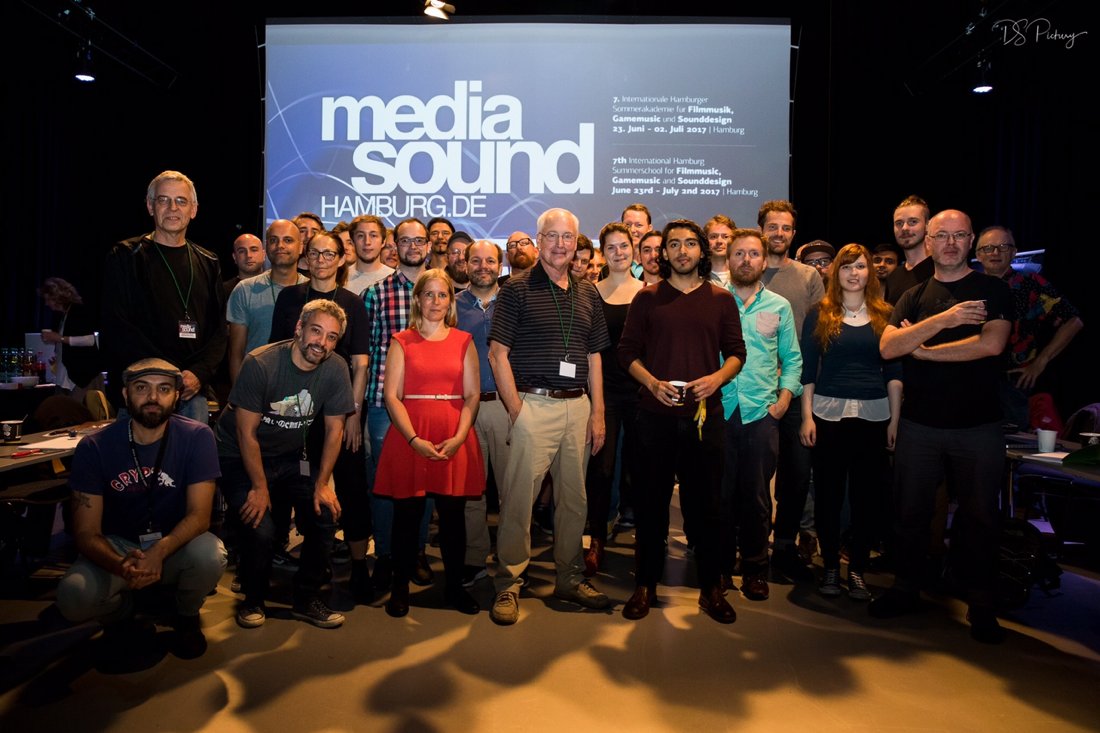 The 7th MSH Media Sound Hamburg ended yesterday with the last workshop day of the Master Class Sound Design under the direction of Ben Burtt.

A special highlight was the MasterClass with Ben Burtt and the audience evening with the four-time Oscar-winner, who among other things made the lightsaber sound and created the language and sound of the Doriden R2-D2. “It is a great honour for us,” says initiator and organizer Achim Esser-Mamat, “that we were able to win one of Hollywood’s most important sound designers for this year’s International Summer Academy. Previous guests in Hamburg included Patrick Doyle, Michael Nyman, Chris Huelsbeck, Randy Thom, Christopher Young, Alva Noto, Michel van Dyke and Hauschka.

For the fourth time, the Young Talent Award Game Music Media Music was presented as part of Media Sound Hamburg. Winners are Maxime Hervé from France (1st prize), Oliver Parchment from Germany (2nd prize) and Lev Tyrnov from the Ukraine (3rd prize). Lukas Markström from Sweden and Adreina Gomez from Venezuela received a special mention. Her submitted works for string quartet were performed by the renowned Kaiser Quartet on the evening of the award ceremony.

Kishore Acharya from Nepal was this year’s MSH scholarship holder in Hamburg. The scholarship includes free participation in all Master Classes, workshops, forums and special events as well as accommodation and meals. The promotion of young talent is extremely important for Achim Esser-Mamat. “We have many foundations and initiatives on board that support us with a scholarship and thus support people from regions for which it is difficult or even impossible to take part in our summer academy. The previous scholarship holders still benefit above all from the top-class network and continue to rave about the concentrated and familiar working atmosphere many years later. In 2013 Andrés Duarte from Guatemala was present. After his participation in MSH, he operates the only recording studio in his country and is very busy.

MSH Media Sound Hamburg is a project of the International Film, Television & Music Academy. In addition to the Ministry of Media and Culture of the Free and Hanseatic City of Hamburg, the foundations Focal and Fondation SUISA, Buma Cultuur, Berufsvereinigung Filmton, DEFCOM, Composers Club e.V., Interessengemeinschaft Hamburger Musikwirtschaft, HAW and Filmförderung Hamburg Schleswig-Holstein are among the longstanding sponsors and partners.

The 8th International Summer Academy for Film Music, Gamemusic and Sounddesign will take place from 8 to 17 June 2018 in Hamburg

Full sound at the Elbe River