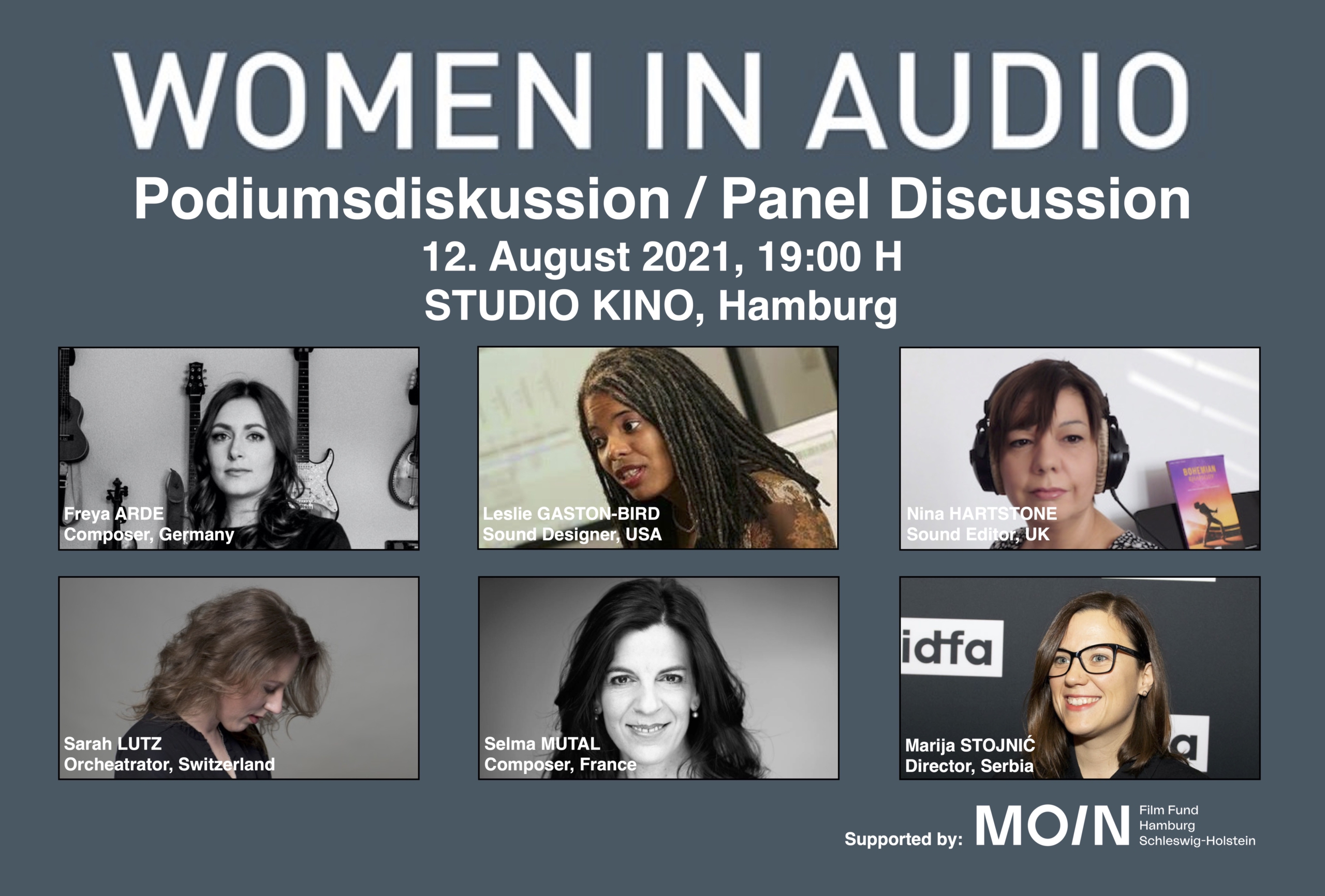 12/08/2021 07:00pm – 10:00pm Is equality among artists and sound creators still a problem? What must change? International guests will provide an insight into the work of women in this global market. In this panel discussion, the standing of women in the audio industry will be discussed and the development of the last few years looked back on. And of course we also look into the future!

* ATLANTA INA BEYER, is a cultural scientist, author and journalist. She teaches Gender and Diversity at the Rhine-Waal University of Applied Sciences and conducts research on queerness and popular culture, among other topics. Her dissertation deals with queer and feminist punk utopias. She lives in Berlin.

Leslie Gaston-Bird owns the post-production company “Mix Messiah Productions”, as well as acting as Vice President for the Audio Engineering Society . She taught audio production and audio post production for 15 years at the University of Colorado Denver and is a voting member of the Recording Academy for the Grammys. Leslie also wrote the book “Women In Audio“. She currently resides in Brighton, England.

Nina Hartstone has won the Oscar for Best Achivement in Sound Editing as Supervising Dialog/ADR Editor on “Bohemian Rhapsody”. She is working in feature films, specialising in Dialog and automatic dialogue replacement (ADR). She has worked in the industry since the early 90’s. Her credits include “An Education” (2009), “Gravity” (2013), “Cats” (2019) and “Bohemian Rhapsody” of course, for which she has on a Bafta as well. She lives in Windsor, U.K.

Selma Mutal is a composor for dance, theatre, television and cinema. Born in Peru, she studied in Amsterdam and Paris. Her credits include director Claudia Llosa’s film “THE MILK OF SORROW”, “UNDERTOW” by Javier Fuentes-León, as well as Tod Lending’s short film “VEZO” and many more. Lately Selma won the “Best Soundtrack Award” for the TV Mini Series “Lucky Day” at the International Series Festival of Buenos Aires.

Marija Stojnić is an award-winning director and producer whose recent films focus on cultural heritage, ancestral music and experimental sound. Her film “Speak so I can see you” premiered at IDFA 2019 and MoMA’s DocFortnight 2020 in New York. In 2016 she founded the production company Bilboke and since 2019 she is part of the film collective SET SAIL FILMS.

Freya Arde is a multi-award winning composer, guitarist and producer. Her latest feature productions “Endzeit” (directed by Carolina Hellsgård, 2018) and “Meine wunderbar seltsame Woche mit Tess” (directed by Steven Wouterlood, 2019) premiered at the Toronto International Film Festival and the Berlinale and are being shown in cinemas worldwide. Shortly after receiving her master’s degree in film music from Filmuniversität Babelsberg Konrad Wolf, she won the German Film Music Award for Best Newcomer for her music for “Nelly’s Adventure” (2016, directed by Dominik Wessely). Since then, she has worked full-time as a composer, scoring documentaries and feature films. In her unique soundscapes she combines acoustic instrumentation with audio processing and electronic elements. She has worked with orchestras such as the German Film Orchestra Babelsberg and the Brandenburg State Orchestra Frankfurt. In her new film score for “Das geheime Leben der Bäume” (directed by Jörg Adolph, 2020), she blurs the boundaries between classical music and sound design by embedding animal and plant sounds from the forest.